Just a few months before this test, we would have unquestionably suggested a cast option to anyone looking for a bolt-on, stock DSM flange manifold. It has long been the consensus that “cast is king” in the DSM bolt-on turbo world. However, people kept asking and new bolt-on turbo options were being developed, so we revisited it with a really slick design and we wanted to give it a shot with and see what it could do.

So here we are, and here is the test! 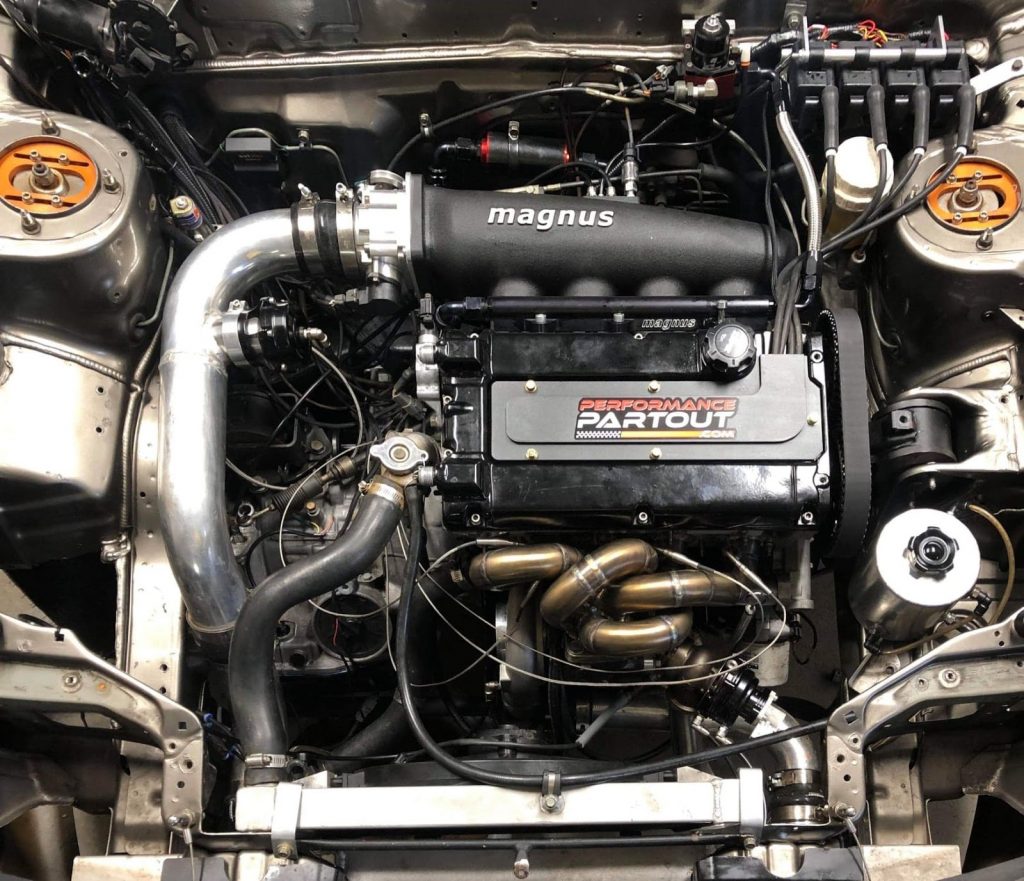 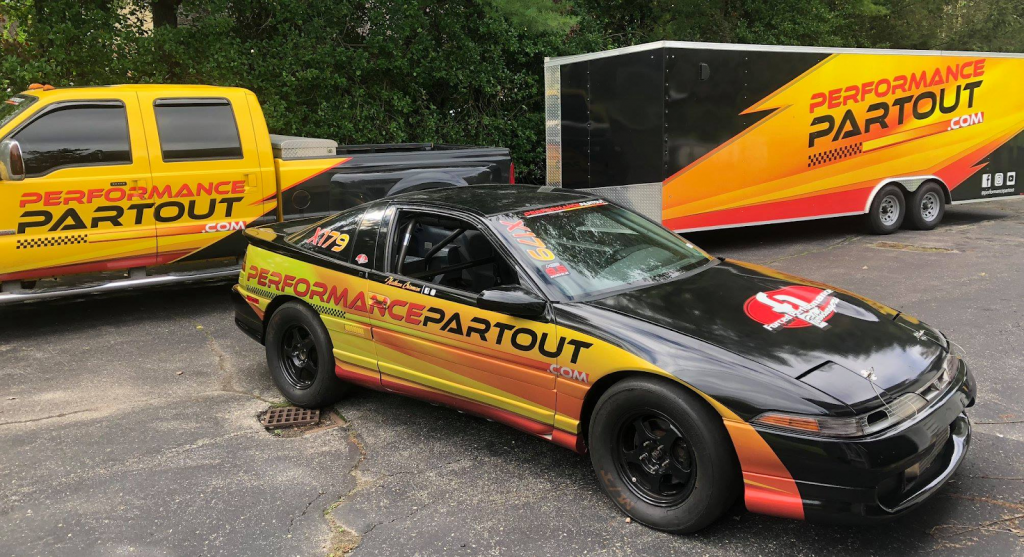 First off, a huge, HUGE thank you to Nathan Crisman of Performance Partout. Many things came up along the way in order to get the car in testing condition, and he tackled it all with urgency- just to get the testing and data out there for everyone ASAP.

If you haven’t heard about Performance Partout, let’s take a minute to talk about how incredible they are for our community and what they offer. They are based out of New Jersey, and sell new and used stock and performance parts for our platform. Their website is extremely easy to use with a fantastic search function, and by purchasing from them you are supporting people who support our community. We always check their website and send a PM on facebook about what we are looking for before we shop anywhere else; it just takes the hassle out of finding parts – new/used/aftermarket – for these cars. Both Nathan and John are an absolute delight to work with and we highly recommend checking them out and acquiring all the goodies for your car.

Additionally, Nathan – the owner and founder of Performance Partout – is incredibly data driven, unbiased, and always shares his vast knowledge. He is swayed only by products that perform and work for his setup. One of our favorite parts about Nathan is that he never holds anything back – he shares everything for the good of the community. Whether it’s good or bad, he’s going to give only the facts. We’ve learned a lot from him in the past (we are kinda addicted to watching all of his videos where he shares literally anything and everything he’s learned) and it’s been an honor to work with him on this test.

This test of the Morrison Fabrications (MF) DSM bolt-on manifold vs the venerable Forced Performance (FP) cast race manifold was performed at M.R. Performance in Mineola, NY on January 10, 2020, using a Mustang chassis dynamometer (dyno) with the FP manifold installed for baseline runs. Two initial pulls were performed at wastegate pressure to ensure proper dyno settings, calibration, and vehicle base tuning and are not included in this test presentation. Six pulls were performed with closed loop boost control targets of 36psi, 40psi, and 44psi – two pulls at each respective target with minor adjustments made to the boost control base duty cycle on the second of each target level to hit and maintain the target boost level for an accurate comparison. The Morrison Fabrications manifold was then installed while still strapped to the dyno, with seven more pulls performed: 2 @ 36psi, 1 @ 38psi, 2 @ 40psi, and 2 @ 44psi boost targets. Again with the same procedure for adjusting the boost control base duty cycle map to most accurately hit the target boost level.

No changes were made to the fuel maps, ignition timing maps, or any other mechanical or electrical systems on the test vehicle during the testing procedure to ensure consistent and unbiased test results. The haltech ecu recorded all pertinent data internally for every dyno pull, and is available for peer review including but not limited to: Boost Pressure, Exhaust Backpressure, Wastegate Position, Engine Pressure Ratio, Torque Converter Slip Percentage, Intake Air Temperature, Boost Control Duty Cycle Output, Boost Control Short Term Trim Percentage, as well as most commonly data-logged engine tuning parameters.

We recognize that the most important factor in testing power output change of a given mechanical part is to equalize and hold consistent, the variables associated with engine tuning. To this end, we have based the test methods and evaluation of results on the basis that a valid and fair comparison is most likely achieved with the most consistent boost level, and the dyno pulls selected for direct comparison in this report were chosen with this constraint held first in priority. An unfortunate constraint of this test is that the exhaust manifold is an integral part of the turbocharger and boost control system, and changing this mechanical part will certainly alter the output boost pressure level, requiring fine tuning of the boost control base duty cycle tables from run to run. Compound this change with a turbocharger system that is being used at near maximum flow capacity, and this test was ripe with fluxuations in delivered boost level, even with our best attempts to equalize, given the time constraints and and attention to minimizing wear/tear on the test equipment & vehicle. While it could be said that increasing the amount of pulls done at each boost target level with more fine tuning of the boost control settings might have yielded a more absolutely comparable boost level, there is always a risk involved with putting many repeated high power/stress runs on the test vehicle that a mechanical failure can arise mid-test causing an untimely end to the test program. Therefore, two pulls at each level with one change in base duty cycle was deemed the best risk vs reward in the test operator’s judgement and was completed in about six hours total.

Design factors involved in the manifolds used:
The FP Race manifold has larger runner diameters vs the MF manifold, but the MF has smoother bends, near equal runner length, and a much better angle of entry at the collector.

Pulls overlaid at 36, 40, and 44psi boost targets. It is important to note the boost psi labelled in each run are only targets, as there wasn’t enough time/runs to perfectly dial in the same boost throughout the run on each manifold (and the MF typically lowering boost with no other changes). The Morrison Fabrications manifold is in red, and the FP Race cast manifold in blue. Shown are horsepower (thick solid), torque (thin solid), and actual boost (dotted). Below each run is a graph that compares the horsepower differences along side the differences in boost pressure at each rpm. 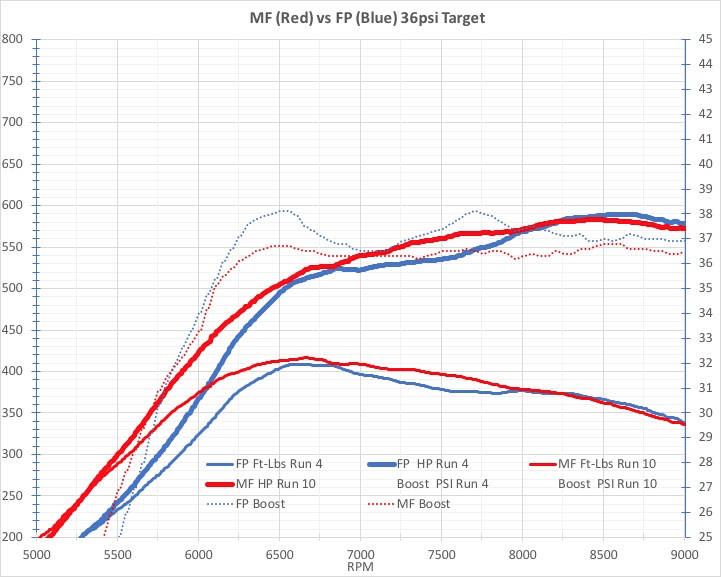 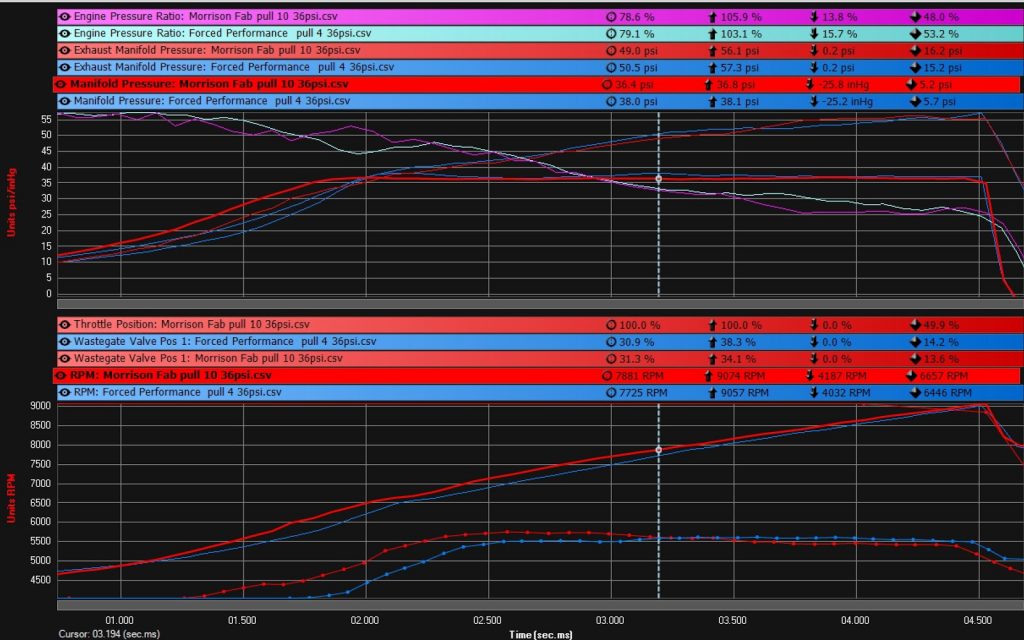 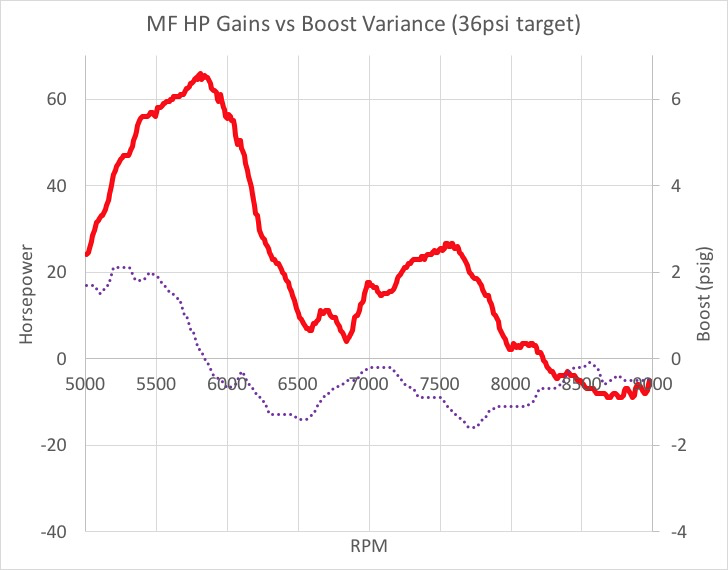 Up first, 36psi. The FP manifold varied between 38-37psi and the MF settled right around 36.5psi, with the FP manifold having a higher boost average the entire run except for part of the spool up range. Despite the FP manifold being at an advantage in boost vs the MF, the MF made more power everywhere except for the last 800rpm, from 8200-9000rpm. The MF power gains are partly from the quicker spool, but even at 5800rpm there is a nearly 60whp power gain! The power gain varied between 10-25whp up to 8000rpm, even with boost being lower by around 1psi. From 8200-9000rpm the FP had a 0.5psi and 10whp advantage over the MF. 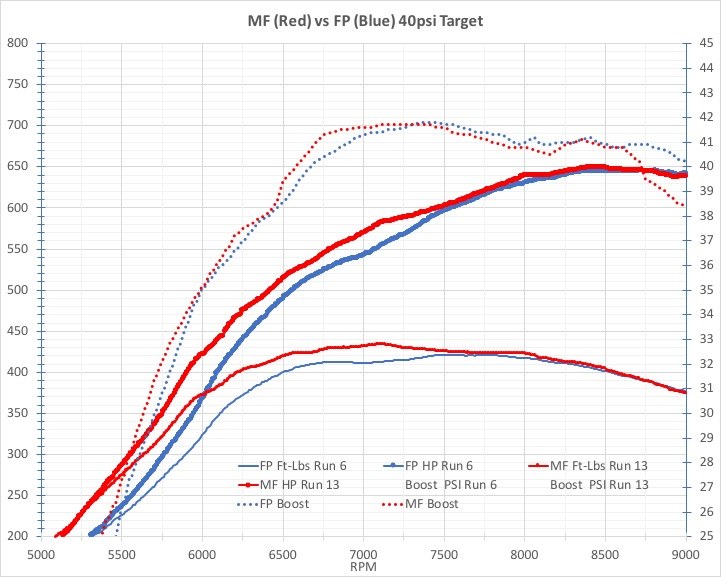 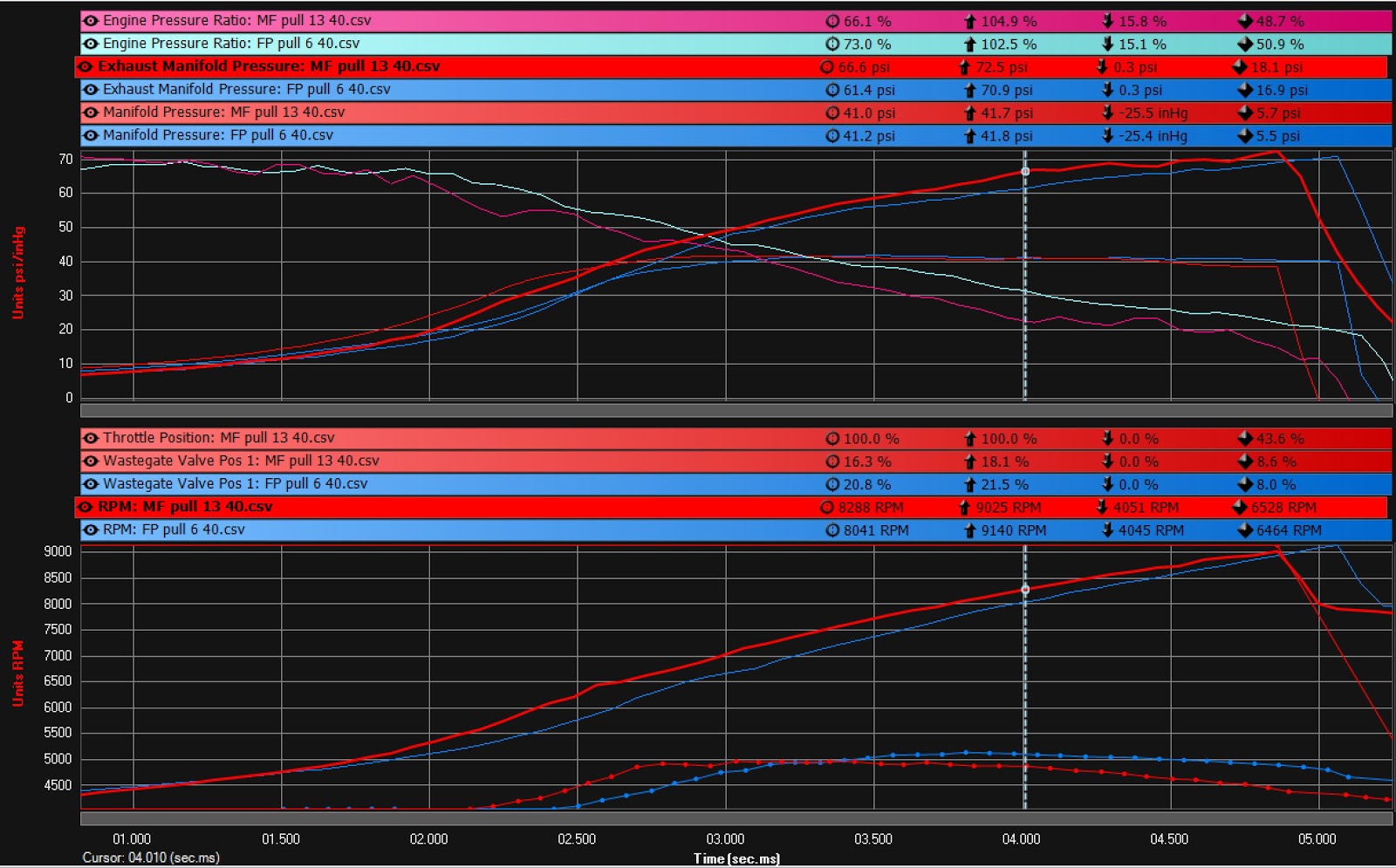 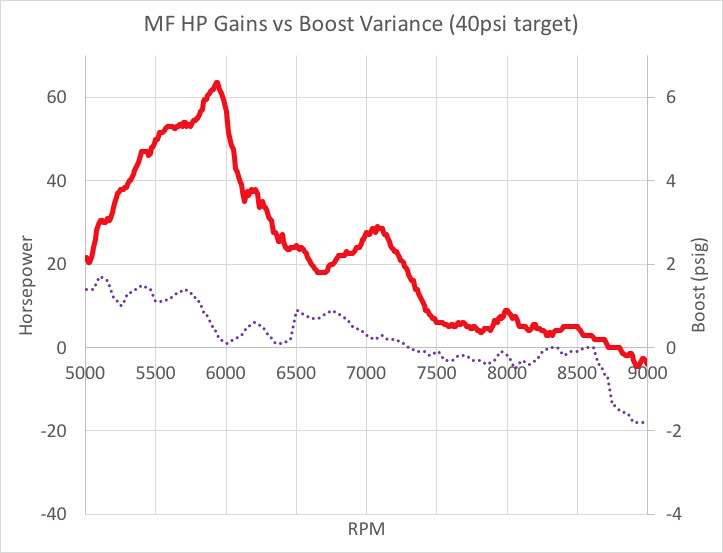 The 40psi pulls ended up much closer in boost between the two, with the MF being higher by ~1.7psi initially (quicker spool) and then the FP being higher from ~7500rpm to the end of the pull. There is a very similar trend as before of more power (even at less boost) all the way up to 8750rpm where both the MF and FP power curves merged, with the FP at a 1.5psi and 4hp advantage at 9000rpm. 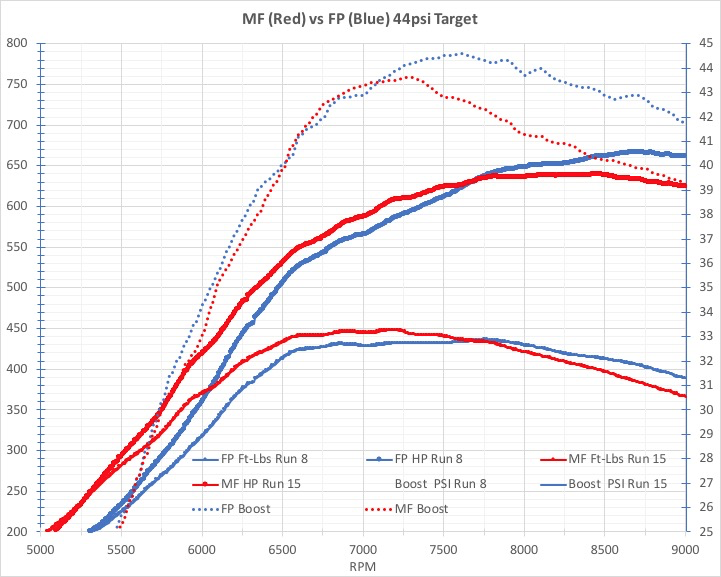 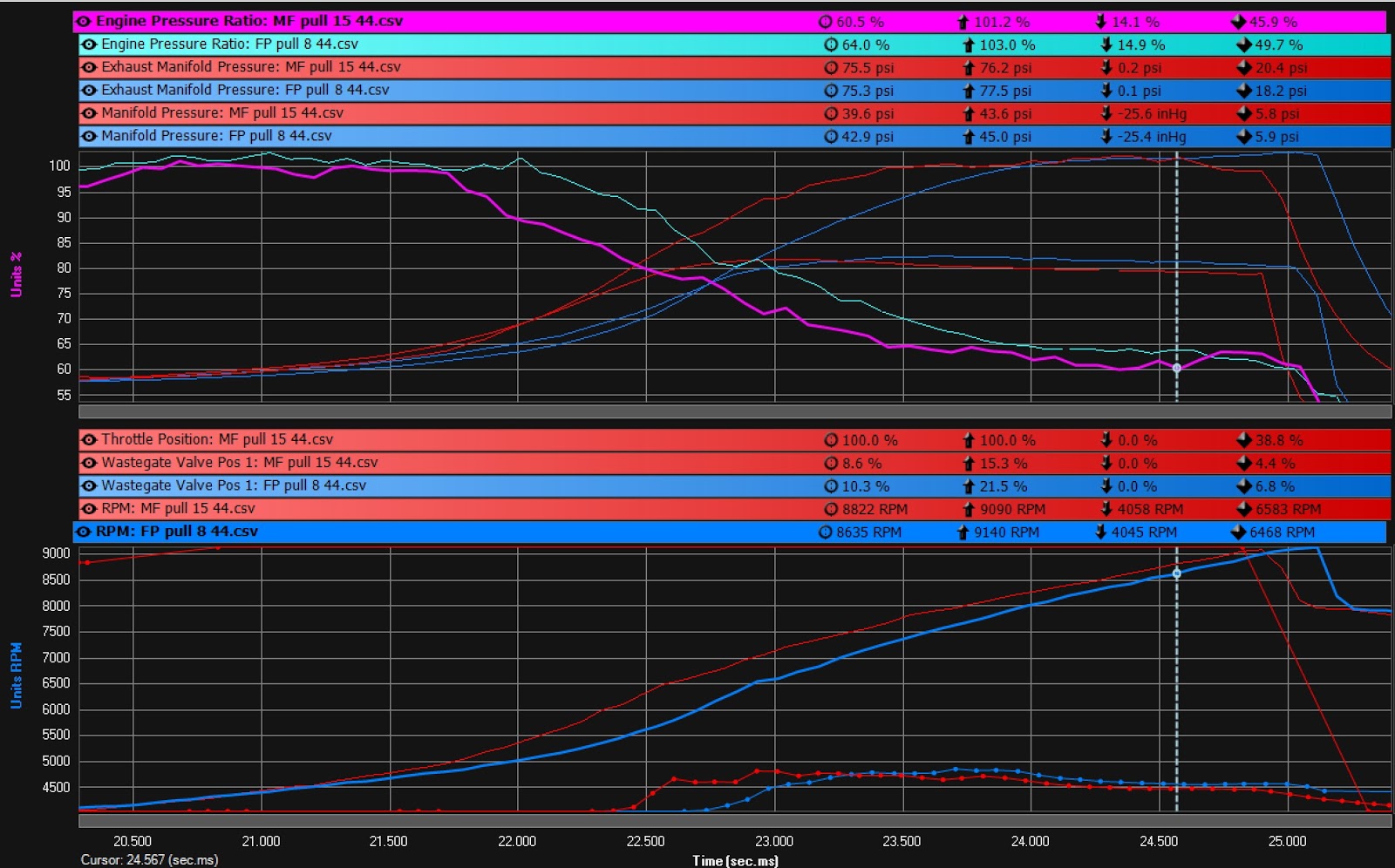 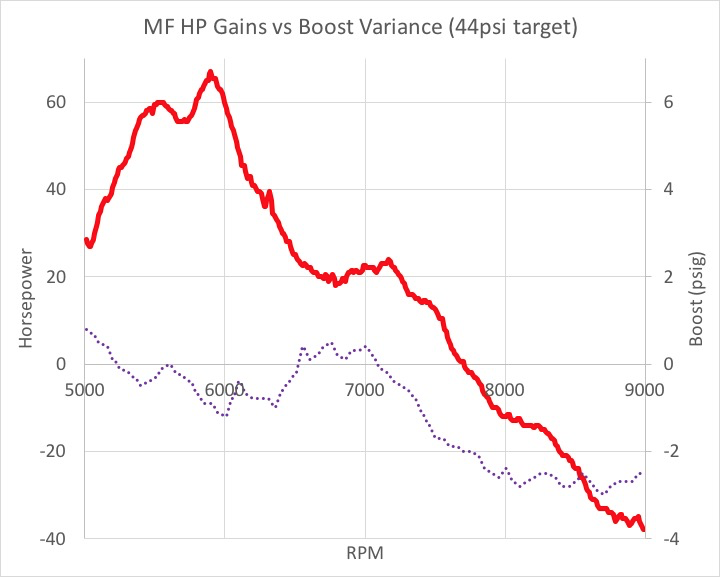 Finally, the 44psi pull. In this run, boost was already expected to drop from the 44psi target at high rpm due to the turbo being at its flow limits at the 800hp range. The MF manifold had a harder time holding boost than the FP (the MF actually held boost better in its previous 40psi run) and was down by 2-3psi by the end of the pull.
From the beginning at 5000-7000rpm, however, the MF manifold had a 20-60whp power advantage, despite a mostly lower boost level. After 7000rpm, the power advantage diminished along with boost until both the MF and FP made the same power at 7600rpm. At this point, the MF had 2psi less boost, and continued to drop power and boost, while the FP manifold kept making power to 8750 with 3psi more boost.

*The later runs of the day and holding boost getting progressively worse was likely due to the wastegate position sensor loosening up and bleeding off boost, which fell off completely the next time the car was ran at the track*

From Nathan:
“We believe this data shows that the tubular header had a greater than expected impact on increasing 5000-7500 rpm power (vs 7500-9000rpm expected) and promoting earlier spool-up, with the FP-Zero being the largest of turbo configuration and the highest rpm threshold for spool. As noted in the datalog graphs that are set against time, the MF manifold on all three tests has greatly decreased the time from initial WOT at 4000rpm to hitting boost target around 6500rpm, so much so that the graphs appear to be offset! This illustrates the large gains of 60whp prior to 6000rpm that get the engine/turbo combination spooled up and into the powerband so much earlier. This effect was drastic and easily noted just from hearing the pulls in the dyno room. Simply put, on the street, this manifold will bring in the boost/torque faster and earlier, and will make the vehicle accelerate out of corners and off stoplights drastically better, and greatly increase the fun factor.”

Which setups this manifold would benefit the most:
“While this test is the most extreme parts setup that is biased toward high rpm power, this MF manifold will actually be ideally matched with a “medium range” turbocharger and an engine parts combo (cam/intake) that does not need to operate in the 8500-9000rpm range to achieve peak hp. An example of this would be an FP Green/Red turbo that would be operating only in the rpm range where the MF manifold showed significant gains, without needing to rev to 9000rpm. Effectively, this manifold matches up best with the more typical 500-600hp output and rpm range of the mid-sized bolt-on turbo options commonly available.”

—-
Note: A similar “large runner” MF option isn’t possible, as smooth bends and nice entry/exit angles just don’t fit between the flanges for factory placement. And honestly, a large runner option would lose many of the benefits this manifold offers for 99% of bolt-on setups anyway, while the runner size used was proven to still happy to keep up in the 8-9000rpm and 40psi range, well out of the typical bolt-on turbo rpm range.

The test results were somewhat unexpected- we initially tackled this experiment expecting to end up with something for all out, far-end of the scale bolt-on turbo setups- the 1%. What happened, however, is we ended up with something that has very substantial gains in the exact rpm range where most bolt-on setups live- which was a pleasant surprise.

There wasn’t a point in the rpm range where the MF manifold didn’t outperform the FP at the same (or less) boost below 8000rpm, which is the end of the usable rpm range for most bolt-on turbos/setups. A comparable FP green/red/black will have peak power between 6000 and 7500rpm, so there will only be gains across the board- in power, torque, and spool. We also showed in previous tests, that boost threshold/spool was within ~50rpm of a ported 2g manifold- so power gains will be even more significant with extremely comparable response. Truly a win-win. All in all, we were very excited to see that the manifold kept up on a setup like Nathan’s, but even more excited that it showed extraordinary gains for the 99%!

There isn’t one part of this piece we aren’t proud of and we hope you enjoy it as much as we do!